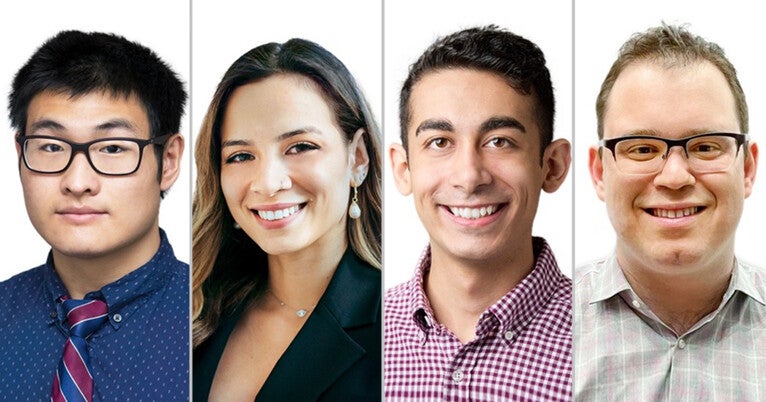 A medical student who studied by candlelight while living with the violence of civil war in her home country of Syria, and a law student who spent her early years living in poverty in El Salvador are among four Yale students who have been selected as 2022 Paul & Daisy Soros Fellows.

Each year, the Paul & Daisy Soros Scholarships support 30 “new Americans” – immigrants or children of immigrants – who pursue higher education in the United States. Fellows were selected from a pool of more than 1,800 applicants from across the country for their potential to make significant contributions to the country. Each receives up to $90,000 in funding to support their graduate studies.

“Immigrants, asylum seekers and refugees are a vital part of the United States,” said Craig Harwood, director of the Paul & Daisy Soros Fellowships for New Americans, in announcing this year’s recipients. “The Paul & Daisy Soros Scholars demonstrate the ingenuity and diversity of perspectives that immigrants from all walks of life bring to American graduate programs and to the country as a whole.”

In addition to receiving $90,000 in funding for their graduate program, 2022 Scholars join an active community of past recipients of the merit-based scholarship. Past recipients of the Soros Fellowship include US Surgeon General Vivek Murthy; Olympians Amy Chow and Patricia Miranda; US Ambassador to Spain Julissa Reynoso Pataleón; Stanford AI leader Fei-Fei Li; computational biologist Pardis Sabedi; composer Paola Prestini; Nirav Shah, director of the Maine Centers for Disease Control; Andrew Cherny, CEO of Aspiration; award-winning writer Kao Kalia Yang; and over 700 other people.

Biographies of Yale Soros scholars follow. More information about the winners can be found on the scholarship website.

Anise Barmada grew up in Damascus, Syria, where he lived for four years in the midst of civil war. He continued to go to school during the war, studying by candlelight, hoping for a better future. When he was 17, he immigrated with his mother and two brothers to Illinois. At his high school there, he took advanced placement classes while simultaneously learning English.

Barmada received the four-year President’s Award Program Scholarship at the University of Illinois at Chicago, where he double majored in chemistry and biological sciences, earning the highest honor in both , and a minor in mathematics. Throughout his undergraduate years, he worked 11-hour shifts at a restaurant on weekends. Despite commuting to and from college on weekdays, he made time to volunteer as a clinical assistant, college tutor, and research mentor, and he served on several campus leadership committees. He maintained a perfect GPA, was elected to Phi Beta Kappa as a junior, and won the Riddle Award as the university’s most outstanding graduate.

As a Gates-Cambridge Scholar, Barmada earned an M.Phil. in genomic medicine. He has published biomedical research and conducted research on COVID-19 at the Wellcome Sanger Institute in the UK. Passionate about science communication and health policy, he has written opinion pieces for media such as Scientific American, Daily Herald and The Scholar.

Andrea Alejandra Deleon Cruz was born and raised in San Salvador, El Salvador, where she and her single mother struggled with poverty and insecurity. She immigrated to the United States at the age of six with her mother and lived in a low-income community in Los Angeles, where she saw how the cycle of income inequality and segregation in terms of housing contributed to high crime rates. Watching friends and family become victims of mass incarceration, Deleón Cruz became aware of the institutionalized racism embedded in the criminal justice and immigration systems.

A Questbridge Scholar, Deleón Cruz was the first person from her high school accepted to Stanford University. However, due to family obligations, she attended the University of California, Los Angeles as a Regent Scholar and Achievement Scholar before later transferring to Stanford. She majored in philosophy and researched public policy solutions to societal injustices. During her undergraduate studies, she interned at the San Francisco District Attorney’s Office and in the nonprofit sector.

After graduating, Deleón Cruz served as a project manager at Stanford Law School’s Three Strikes Project, helping nonviolent inmates who had received life sentences under California’s Three Strikes Act to have their sentences overturned. When COVID-19 spread to prisons, she created and managed a pro bono program in which 35 lawyers unaffiliated with the project represented clients that the Three Strikes project was unable to represent.

As a student at Yale Law School, Deleón Cruz is involved in the Capital Assistance Project, for which she conducts research and writes legal briefs summarizing death penalty precedents in court. Alabama Appeal for the Federal Defenders Program in the Mid-District of Alabama. She is also part of the Challenging Mass Incarceration Clinic, providing legal representation in federal sentencing proceedings and Connecticut state reassessment hearings.

Edward Friedman grew up in Brooklyn, New York, the child of Jewish refugees who immigrated to the United States with their families from Moscow and kyiv. Born with cerebral palsy and a user of an electric (motorized) wheelchair, he is an advocate for justice for people with disabilities. He served as the Policy and Intergovernmental Affairs Coordinator at the New York City Mayor’s Office for Persons with Disabilities before joining Yale Law School.

At Yale, Friedman serves on the Senate of Graduate and Professional Students and is the voice of students with disabilities on the Provost’s Advisory Committee on Accessibility Resources. He is living independently for the first time in New Haven but remains involved in New York City politics and the city’s disability community.

Freidman is a graduate of the City University of New York (CUNY). He graduated as valedictorian from Macaulay Honors College at Hunter College, CUNY in 2018, majoring in political science with certificates in public policy and human rights and with minors in legal studies and international relations . He plans to pursue a career at the crossroads of legal advocacy and public policy implementation with the goal of advancing accessibility for all.

Kingson-Lin was born in New York to immigrant parents from the rural fishing province of Fujian, China. Shortly after he was born, he was brought to Fujian to live with his grandparents. After five years in Fujian, he was reunited with his parents and lived in the Flushing neighborhood of Queens before moving to suburban Philadelphia.

At Yale, Lin is completing her doctoral work under the mentorship of Professors Ranjit Bindra and Seth Herzon. He researches the design, synthesis, and evaluation of novel chemotherapeutic agents for drug-resistant brain cancers. He also co-founded a company with his mentors to quickly translate his research findings into clinical patient care.