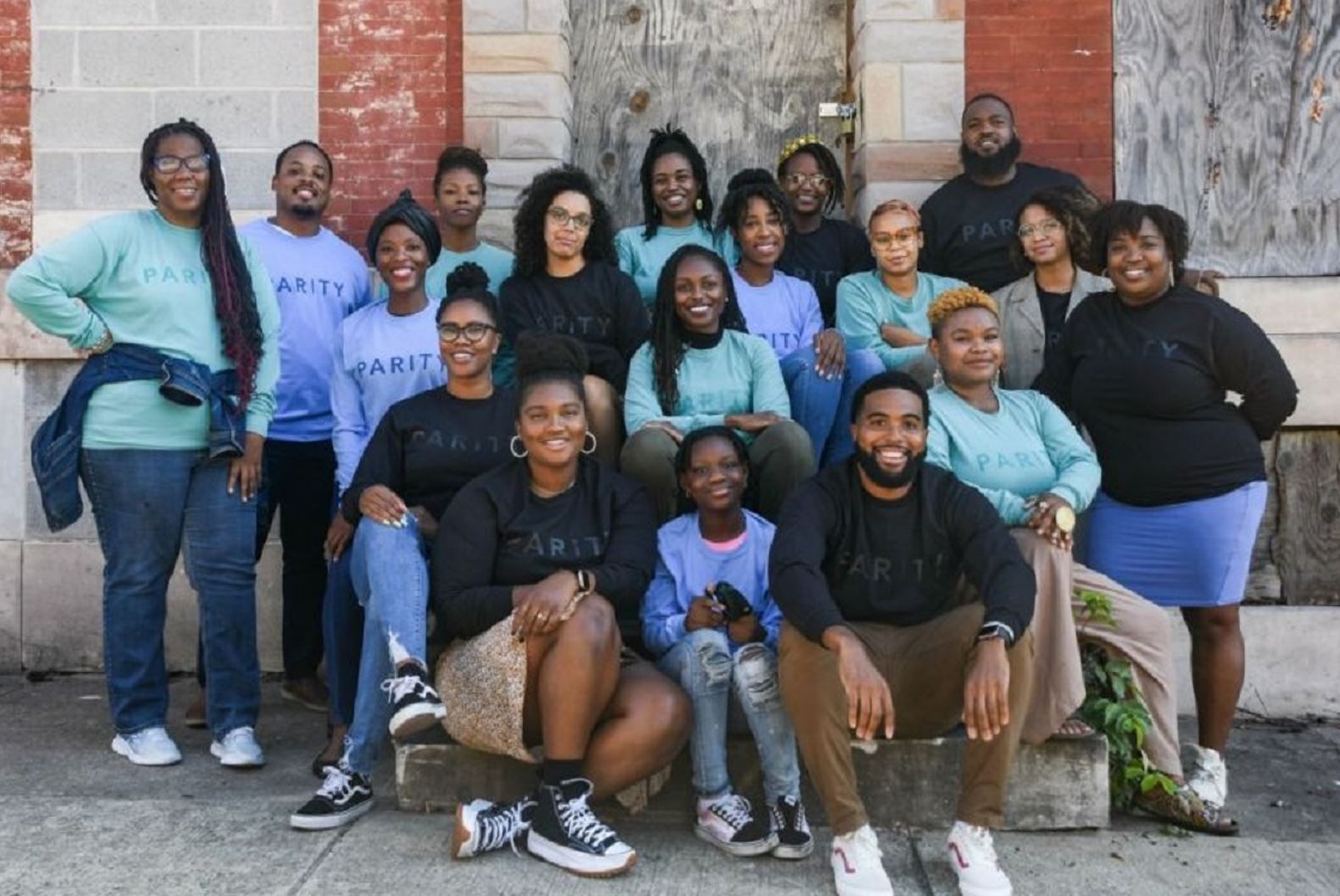 This Baltimore developer is breaking down barriers to rebuild communities

The article below was originally published in Next City.

Bree Jones rides deep. His nonprofit real estate company, Parity Homes, has a buyer collective of 60 households. They all completed an exclusive 6-month program that Jones built from the ground up, covering everything from financial planning and maintenance, to community building and the history of redlining – and how these factors continue. to shape the Baltimore neighborhood where they all want to buy homes.

“It’s about building an intentional, mission-driven community,” Jones says. “We talk about common principles – anti-gentrification, the importance of shared cultural assets, green spaces, things that are no longer part of our common dialogue in America. Older generations did it in the 1940s-50s-60s.

Jones says members of his buying collective have all gone by word of mouth so far. She talks about her work wherever she goes – like volunteering at a local church where a pastor’s family is now part of her collective. Some come from the West Baltimore area where Parity Homes focuses its work; others are from the area but moved when they were teenagers and now want to return.

Parity Homes keeps an architect under contract to help buyers select one of six floor plans for Baltimore’s iconic townhouses. Options include splitting the house into two apartments, to create additional income for the owner, and another affordable housing unit. Three members of the buyer collective have made their selection and Jones hopes to deliver their homes later this year, hopefully by July.

“They call me every week [to ask] how is the house,” says Jones.

For everything Jones has made possible so far, it’s not yet sustainable. For now, Parity is selling the homes for less than the company paid to acquire them. Indeed, homes suffer from the valuation gap, which disproportionately affects historically black neighborhoods. After generations of divestment, beginning with redlining in the 1930s, homes today require significant rehabilitation, the cost of which can far exceed the values ​​the homes will appraise even after rehabilitation.

“He had asked me to testify about a related issue and after that he asked if he could help me and I didn’t know any better, so I raised the valuation discrepancy,” says Jones . “It was a bit of beginner’s luck.”

The funds would fill the gap between the costs of rehabilitating a vacant home or building a new home on vacant land and the estimated price at which the home ultimately sells. However, the bill did not take effect until the start of the fiscal year in Maryland on July 1, meaning the new program was never part of budget negotiations for that fiscal year.

Jones is counting on his funding in this year’s budget, which is currently being negotiated. She knows other potential emerging developers like her — especially other women of color — would appreciate the support to do similar work in other disinvested areas of Maryland.

“Funding mechanisms for entry-level housing stock are still scarce,” Jones says. “Big federal programs like the low-income housing tax credits or the new market tax credits don’t really do that. Why not try to do something that looks like us?

The real estate industry has long had “a whiteness problem”. According to Enterprise Community Partners, only 2% of businesses in the real estate sector are run by black people. At the Urban Land Institute, one of the nation’s leading real estate developer networks, just 5% of its members are African American, while 82% are white — and 69% identify as male.

Even the community development and affordable housing real estate subsectors that serve many black and Latino neighborhoods have helped perpetuate these disparities. In New York — where Jones was born — the nonprofit Community Preservation Corporation has funded tens of thousands of affordable housing units in communities of color since 1974, but according to its internal analysis, less than 10% of its loans had gone to color promoters.

Often, lenders cite the lack of collateral. But it’s a chicken-and-egg situation, given that the lingering history of redlining means that white homeownership rates and wealth levels of typical white households in general remain well above those of non-white households.

Jones wants to help break that cycle by putting the homes she develops in the hands of primarily but not exclusively black households. When otherwise talented but less experienced developers of color approach lenders with little or no wealth from family or friends as a starting point, most lenders find it difficult to work with them while satisfying their regulators or rating agencies. . These calculators come in regularly and look at every loan a lender has made since the last time they were there for a review or rating update.

It’s not impossible, but it’s very difficult for lenders to fight again and again with regulators or rating agencies to defend multiple acquisition and construction loans to multiple emerging developers of color with little or no personal guarantee – especially when everyone can see the road that the developer may not be able to sell the properties at a price that can cover the cost of acquisition and construction. Often the lenders who are most willing to work with borrowers in these situations will also charge the highest market interest rates as compensation for taking on the perceived “risk”.

Banking regulation is not inherently bad. This is to ensure the safety and soundness of the banking system. But relying on personal guarantees as a risk management factor to dominate all other risk management factors is not necessarily set in stone, although it may seem so if you have no collateral.

Jones relied on corporate donors, state grants, philanthropic scholarships and a few personal connections with “very patient” seed investors to launch Parity Homes. She amassed a portfolio of 40 properties — half through foreclosure auctions or private sales, and the other half through Baltimore’s annual tax lien sale. The lien sale is currently undergoing a major overhaul after complaints that it has become a predatory way for big developers to grab large lots of properties.

Jones says the tax lien process could also be a lot friendlier for smaller, mission-driven developers like her. In an area of ​​about ten blocks that she examined closely, she says she identified at least 300 properties with tax liens, perhaps 70% of them with liens in the six figures. Properties can take up to two years to drag through the foreclosure process. “There’s so much inventory in Baltimore City, but it’s all locked behind liens, encumbrances, and other barriers,” Jones says.

The most recent statements from City Hall count 15,032 vacant homes in Baltimore City. Jones says the real number could be much higher – possibly four times as much. For 50 vacant properties, Jones says, there can be 50 different owners, half of whom are deceased, a third are in defunct LLCs with outdated contact information, if any, “and the rest are speculators who are trying to benefit from other people’s trauma.

The situation bears similarities to other predominantly black urban areas, such as Chicago’s South Side, where local community organizations and emerging small developers face a maze of tax liens on mortgage liens layered on top of a tangle of LLCs. and dead-end brokerage phone numbers.

In this post-COVID housing market boom, Jones is seeing more speculators rushing in with all-cash deals in neighborhoods where she has properties underway. Blocks where empty shells used to cost $5,000 are now selling for nearly $100,000. These sales could be tied to the tech-fueled “passive real estate investing” boom in single-family rental properties.

In its sales, Parity Homes provides a “secondary” mortgage – essentially a tranche of seller financing that the buyer does not have to repay unless they later sell the home or refinance their mortgage. It helps keep the main mortgage affordable for the homeowner while serving as a deterrent against house flipping.

Given all the cards stacked against her — female, black, new to real estate development, focused on neighborhoods with property issues — Jones is taking all the help her time is worth. She is an alumnus of the Equitable Development Initiative, a program of Capital Impact Partners, a DC area-based Community Development Finance Institution (CDFI). The initiative is one of a host of similar initiatives created by CDFIs in recent years to help diversify their developer base.

JPMorgan Chase funded the Equitable Development Initiative, which recently awarded a recoupable grant of $2 million to Parity Homes, in conjunction with a larger commitment of $20 million for Baltimore-focused investments, intended to support more women of color in real estate.

The $2 million infusion allows Jones to finally hire his first full-time staff and enable him to acquire and sell at least 200 formerly vacant homes. If the state’s assessment gap program comes into play, or perhaps new federal support from the proposed investment tax credit for neighborhood homes, Jones might be able to acquire, to rehabilitate and sell even more.

“The issue is so big it creates a sense of helplessness, but an institutional partner gives the impression that we can actually do something about it,” Jones says.

This article is part of The Bottom Line, a series exploring scalable solutions to issues related to affordability, inclusive economic growth, and access to capital. Click here to subscribe to our Bottom Line newsletter. The Bottom Line is made possible through the support of Citi.

Boost your cybersecurity skills with these 8 Pittsburgh bootcamps and trainings