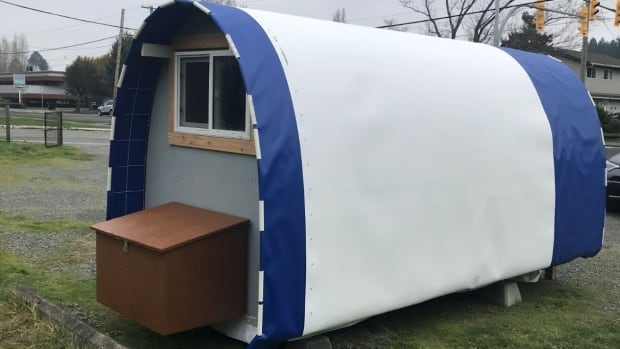 A local group in Victoria, British Columbia, has built what they say is a cost-effective, temporary housing solution to ease the city’s homelessness crisis.

This week, the Community Alliance for Sheltering Alternatives (CASA) completed construction of its pilot Conestoga Hut, which it invited the public to view in the parking lot of Shelbourne Street Church.

“[The huts] are about 60 square feet, they’re safe, they’re very heat-efficient,” said Krista Loughton, an Alliance filmmaker, who has spent hundreds of hours connecting with homeless communities for her job.

The cabin sits on concrete blocks with a front and back wall, a small porch and an insulated door with a deadbolt lock. Layers of farm fencing, moss, heat retaining material and a tarp curve down the middle of the structure to create the side walls and roof.

“They are modeled after a conestoga wagon that traveled [settlers and their belongings] across the prairies,” Loughton said, adding that she discovered more than 200 huts were being used in Eugene, Oregon, as a form of micro-housing for vulnerable communities.

She said that once all the pieces are built, they “fit together like Lego” in about 2.5 hours.

The cabin cost about $3,500 in donations to build. According to Loughton, CASA wanted to build it to “show the proof of concept and put the community on [their] side.”

She said they also hope to partner with nonprofits, the city and BC Housing to bring more huts to the city.

CASA has formed over the past year to help find ways to shelter the city’s homeless until more stable housing options become available.

Rob Reid, a business owner with a retail store in downtown Victoria, said the idea for the project came from a homeless man who took shelter just outside his store.

After Reid and his team struck up a relationship with the person, Reid reached out to Loughton to think about ways to help, especially in harsh coastal weather conditions.

Reid said the project is an example of how local initiatives can help find accommodation solutions to homelessness and, in this case, find an opportunity to help someone sleep on a storefront. store while rejuvenating the city center.

A safe place for personal belongings

Loughton said the huts are a “necessary step up from a tent” in that they provide homeless people with a safe place to store their items.

She said the current city by-law requiring homeless people to put away their tents from 7 a.m. to 7 p.m. every day “makes it impossible for people to do anything during the day.”

“All they do is protect their property, which means so much [to them]. They need a door they can lock, where they feel safe.”

Janine Theobald, Director of Collaborative Engagement for the Greater Victoria Coalition to End Homelessness, said the coalition is willing to support community members by providing these huts and other temporary shelter solutions. in the city.

“It seems like a really viable option for people to shelter safely, [and] to know they can leave, lock the door and go do the other things they need to do,” Theobald said.

Reid said the short-term plan is to apply for a temporary exemption from city regulations so someone can use the pilot cabin and find owners who might be willing to offer space in their parking lots to shelter future cabins.